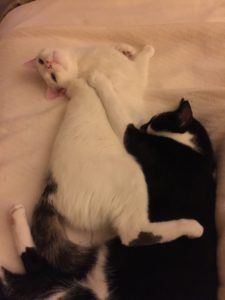 Hello! Nigel, here. I hope that everyone is doing well. I know that it has been awhile since we last spoke, but things have just been so busy at For Cats Only that the doctors have needed me to come in to work for them these last couple of months. Haven’t had much time for my blogging….

This month, Stephanie Brown asks, “I adopted a new cat less than a year ago. I did the whole introduction thing that you are told to do. Will my old cat ever stop hissing, chasing and batting at the new girl?”

Thanks for your question, Ms. Brown. This is actually a common problem that many humans have a hard time understanding. Most humans figure, “Well…I like this new cat…this new cat likes me…I don’t really see any problem in just inviting her to come live at my house.” But there is a problem. The problem is, it isn’t really your house. It’s your current cat’s house. Now, you may not agree with this because you go to work, you pay for the house, you buy the cat litter, etc… But all of that is really of no consequence to your feline master. As far as your old cat is concerned, this house was his house and he resents you inviting new guests to the house without his permission. I’m not saying that adding a new cat to a home can’t ever be done, it certainly can and has been done quite successfully. However, when it fails…it is hardly surprising. Here are some things that all humans must understand before attempting to do this.

First of all..in the wild, cats prefer to live with their blood relatives. It is uncommon for cats that are unrelated to decide to hang out together. So if you know right off the bat that you want more than one feline overlord in your home, it is best to get a pair of siblings from the same litter. Even a mother and child will usually make a good pair.

For many people, this is not an option as they currently have one or two cats and they later choose to add a new kitten. This doesn’t always work out very well. Cat relationships are usually between pairs of cats. This means that an existing cat could get along great with a new kitten introduced to the home, whereas another cat in the house may not. There is no guarantee that all cats will enjoy spending time with one another. Also, just because your cat liked a particular cat in the past, doesn’t mean that he will get along with ALL cats. Furthermore, much of your success will depend on the gender and age of the cats at the time of introduction. Generally speaking, two males or a male and a female are more likely to get along, than two unrelated females. Anytime that two adult cats are introduced to one another, there is a high likelihood they will not be accepting of each other. Adding a kitten to an existing household of adult cats as a higher success rate.

There are some steps that you can take to try to make the introduction successful.

1. Transfer smell between the cats. Before introducing the new cat to the resident cat, place towels or blankets with each cat and then swap them after time has past to allow for smell to attach itself to the items. This should be done well before the two cats are introduced to one another face to face.

2. During introduction, keep the new cat inside of a cat carrier and allow the resident cat to approach the carrier to check out the stranger. There may be some hissing or low growling, but this is normal. Don’t try to interfere…just allow them to get acquainted with the site of one another. You can do this step a few times before allowing the crate to be opened. 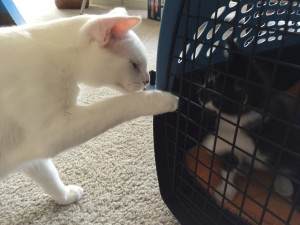 3. Once they have seen each other behind crated door a few times, you can try opening the crate and allowing the new cat to venture out. In most cases, the two will keep a wary but close distance. There may be hissing in both directions, but as long as there are no overt fights, this is really quite normal and is no need for worry.

4. Plug in a Feliway Multi-Cat (or Comfort Zone Multi-Cat) diffuser in the room. The pheromones emitted from this diffuser are not detected by people and can have a calming, soothing effect on cats, effectively lowering their anxiety.

A key to harmony in multicat households is having adequate resources in place for all cats. In general, there should be one more litter box than there are cats in the house. I mean, really…if Cecil is in the lou and nature calls…I like to have an option so I don’t have to wait. So, if you have two cats…three litter boxes are necessary, and they should be in three separate locations. Multiple food dishes and water bowls should be provided so the cats do not have to compete for their meals. There should also be an ample supply of toys to go around. If you find that both cats like the same toy best…get another one of the same!! Also of great importance is “vertical space.” Cats like to climb and having the ability to get up on top of objects makes them feel safe. If you want to discourage them from using your entertainment unit for this purpose, then you really do need to provide them with appropriate climbing objects like cat trees. You can get some really great ones with hiding spots and different types of scratching post materials attached. My personal favorites include areas to hang toys from.

So Ms. Brown, in short…your old cat may not ever really love your new cat. But, if you have not already done so, you can try to make things better by making sure that you have adequate resources available and by plugging in a Feliway Multicat Diffuser. Keep in mind that one diffuser is good for about 700 sq feet of space, so depending on the size of your home, you may need more than one. To get more individualized recommendations, you can contact For Cats Only at 561-687-1188 to set up a behavioral consult with Dr. Stephanie for your kitties.

I hope that this has answered your question. This is Nigel, signing off. Meow!

Font Resize
Contrast
Accessibility by WAH
Call Us Text Us