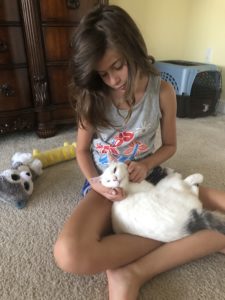 Hello all! Nigel, here. As you can see, I am feeling very relaxed as my human slave showers me with the love and attention that I deserve. But not every moment of my life is this relaxing. There are plenty of times that I am quite nervous. For example, when Dr. S and Dr. J went on their veterinary conference in February, Cecil and I were left in the care of the younger (less experienced) humans. We were so lost without our doctors, that one of us took to pooping outside of the litter box. I won’t say which one of us it was….but, does it really matter?

From what I know of my fellow felines, stress is something that we just don’t handle all that well. Sure, there are few really calm kitties out there, but for most of us, any change in routine can set us off course. We like things to stay the way they are. To be familiar. To be comforting. And this…is where pheromones come in!

Pheromones are a type of natural message that cats release into the air, or place onto objects. And before you humans get grossed out, no need to worry….these messages are only perceived by other cats. There are basically 3 kinds of feline messages:

1. “Happy Messages”–When cats are feeling happy and comfortable they will frequently mark their territory as familiar by rubbing their face against corners, furniture, people, or other cats. They leave the feline facial pheromone in these spots. This pheromone helps the cat to feel comfortable and secure.

2. “Harmony Messages”–Mother cats produce a pheromone message in their mammary glands that when released communicates a feeling of social harmony between the kittens in her litter. This message is called a “cat appeasing pheromone.”

3. “Territory Messages”–When cats scratch on objects in their environment, the glands in their paws leave pheromone messages that say “this is mine.”

Lucky for us cats, and by extension for you humans, the science guys that work in laboratories got together and figured out how to make exact copies of these cat message pheromones. They put the copies in a liquid inside of a bottle and you humans can go purchase these pheromones to help your feline overlords have a better life. Using feline pheromones in situations such as separation anxiety, urinating outside of the box, and intercat conflict in a multicat home can make such a huge difference! Now, whenever the doctors leave us, thereby changing our expected routine, they plug in the special diffusers that contain the pheromones so that I don’t feel so nervous that I must poop outside of the box—uuuhhhhh, I meant…so, that Cecil doesn’t poop outside of the box.

If you think your cats have anxieties that would be helped by the use of pheromones, call the doctors and staff at For Cats Only. They can help you know which type of pheromone would be the most useful for your particular issue.

Font Resize
Contrast
Accessibility by WAH
Call Us Text Us